Meet The Characters feat Busting Out by Author Diane Kelly

Hello.  Welcome back to

This week I am Featuring Author Diane Kelly and her book Busting Out.

Officer Chastity "Cha-Cha" Rinaldi is a bold and buxom motorcycle cop with the Mobile, Alabama police department. She might be tough, but she's got a girlie side, too.

Newton Isaac is a high school physics teacher and faculty advisor for the school's robotics club. He's a hot geek who's beloved by his students and makes science fun.

Billy Wayne Almstead, Trent Bosch, and Daytona Dickerson are the bad guys Cha-Cha pulled over on her first traffic stop as a rookie. They were convicted of human trafficking and attempted murder and sentenced to life in prison, but they've just escaped.

Geary is the name of the robot that the high school robotics team built under Newton's leadership.

Diane Kelly gives the reader some fun and interesting characters and plots in the Busted series.

Cha Cha was a fun and interesting character that takes her job seriously.  So seriously she manages to to 'take down' 3 bad guys all by herself and saving a trailer load of women and girls from human trafficking!

Cha Cha is one tough gal.  But she is sweet too.  She is a ferocious pet mom with a big heart. 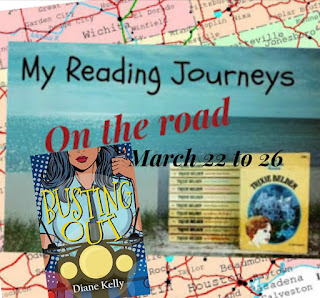