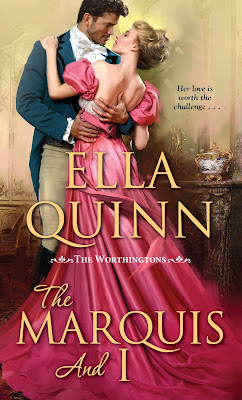 About the book (provided by Goddess Fish Promo)
Trouble is no match for a lady of the extended family—except when it comes in the form of a most irresistible gentleman . . .

Lady Charlotte Carpenter’s brother-in-law has put an infamous brothel owner out of business—yet it is Charlotte who suffers the consequences. Abducted by thugs and held at an inn, she is plotting her escape when she’s suddenly rescued by a dashing gentleman. Only afterward does she realize she’s seen him before—with two courtesans! Unwilling to tarry with such a man, Charlotte makes her second escape. But it is too late to repair her reputation . . .

A known gossip has spied ’s movements, and his report is speeding through the rumor mill. Soon, everyone knows that spent the night with Constantine, Marquis of Kenilworth. And everyone agrees the only answer is marriage—including Constantine himself, his overjoyed mother—and his mistress! But ’s abductors aren’t finished with her yet. Now will do anything to protect the spirited woman he loves and win her heart . . .

Read an excerpt
“I have come to see Lady Charlotte.”

“Follow me, my lord. The family is in the garden for the wedding.”

To the best of his knowledge, was the only young lady of marriageable age not already wed. Had Harrington returned with a special license? He could go to the devil it he had. He could not have her. was Con’s, and it was about time she knew it. “I can find my way.”

“As you wish, my lord. Go straight down the corridor.”

He must put an end to this wedding before it was too late. Rushing down the corridor, he looked to his right, and spied open French windows in a parlor. A large group of people were gathered just beyond the terrace.

Con prayed he was in time to stop her. Halt the wedding. Hell, what sort of man asks permission of his father to marry someone like ? Not one she needs.

The Fates had given her to him and no one was going to take her away. Even if the time to object had passed, he would make himself known. She was his.

Dashing through the room, he arrived in the garden in time to hear say, “If there is anyone who objects to this wedding, speak now or forever hold your peace.”

? Con almost skidded to a stop.

And I thought
It has been a very long time since I have read a Historical Romance.
This one caught my eye.  The synopsis sounded like it would be a great read.
I was surprised at the subject/plot beyond the romance.  It was an interesting read and enjoyable at the same time.
I was not disappointed.  I would like to go back and read more of this series.
Although I came in at book 4 I was not lost with the story.
The main characters are likeable and there are some sub characters that add to the story.
The Marquis and I was much better than I expected.

Enter the giveaway
Ella will be awarding a $25 Amazon or B/N GC to a randomly drawn winner via rafflecopter during the tour.