Murder in the Family by Lesley A Diehl 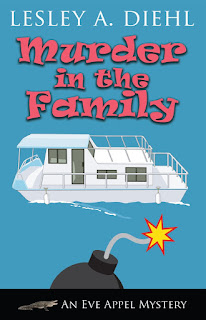 The past comes back seeking vengeance. To save her family and friends, Novice PI Eve Appel, pregnant with her second child, must outwit the bad guys in a final act of desperation, risking her life and that of the man she’s asked to help her, her mob boss friend, Nappi.

Someone is targeting the friends and family of Eve Appel Egret, owner of a rural Florida high-end consignment shop and part-time private investigator. The intimidation includes stealing the horse of one of Eve’s rancher friends, forcing her car off the road, attempting to kidnap her daughter and leaving messages on her phone threatening more dreadful acts to come. Eve almost succumbs to gas inhalation when someone enters the consignment shop and cuts the gas line while she is in the shop. And just when Eve could use the help of her mob boss friend, Nappi, with his far-reaching resources, she discovers he has gone into hiding, himself a target. By the time she finds him, he has lost all his financial assets and his influence, but not his determination to help Eve. It’s clear to Eve that someone from the past has returned to seek vengeance on her and those she loves. Her hunches lead her to believe she can bring the person responsible for the threats into the open by setting a clever and desperate trap. She knows, but she never counted on who they would be.

One of my favorite  series!

Lesley Diehl crafts a story/plot that keeps you turning the pages.

I love the characters.

I couldn't  help but feel sorry for poor Eve as all the drama unfolds.

And then instead of Nappi in the wings to help her out he disappears.

Even though Nappi's not around Eve's tribe ..her husband Sammy, her father in law, her granny and Crusty the P.I. are great characters  that are helping Eve juggle parenting, homelike and chasing bad kids when necessary!

Each book in this series seems to be better than the one before.  I have loved each one.

My review  will appear on retail sitesand Good Reads

Visit  the tour
Click  Here
Posted by GranthamLynn at 6:02 AM